One of the owners of Uptown’s Holiday Club is under fire after he posted a controversial meme Tuesday on Facebook.

The image was of a woman with her child, a Mexican flag and the words “’I don’t want you to take away my child’” on the top of the image and “Well then, don’t become an illegal alien sneaking across our border” on the bottom.

Some on social media challenged his understanding of immigration, and his response was, “Sure I do, came here with my family as a young boy with my parents from Europe legally, took my parents forever to make that happen ! Don’t f****** tell me I dont get it .! (sic)” 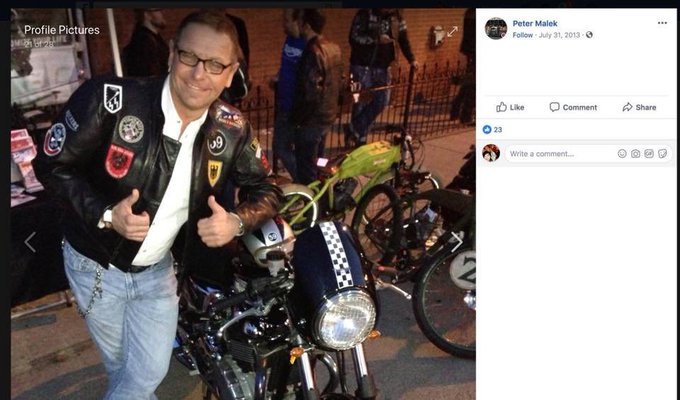 In a statement to Block Club Chicago, which first reported the story, Malek wrote, “I’m sorry but it was not a racial post…

In a tweet shared online (see above), Malek is wearing a motorcycle jacket with what looks to be a black-and-white SS badge on his right shoulder, a common symbol used by Nazis, according to the Anti-Defamation League.

Across social media, patrons promised never to return to the bar. Another post lamented the memories spent there, and yet another said the owner’s actions were in line with her experiences with him anyway.

One-star Yelp reviews flooded the business’s page, calling Malek racist and ignorant, and said that his social media post was hate speech. As noted by Eater, Yelp’s “clean-up” response has yet to be activated, and negative comments are still coming in.

This isn’t the first time Malek has been outspoken about his views. Other posts have included sharing videos of liberal protesters getting injured by cars and black people being choked by police.

Calls to the Holiday Club were not returned, and requests for interviews were also not returned. However, the bar’s Facebook page issued a statement, saying that the Holiday Club has “always been on the forefront of righteousness and liberal social thought and have supported the ideology and real application, of strength through diversity.”

“Please know, we as a whole at Holiday Club in no way endorse, support or placate to Trump Policy in general but especially with regards to immigration and his attempts to create a culture war. (A culture war that he is winning by dividing us, the morally righteous). We, the Holiday Club owners, staff, patrons and those that found a post (not by Holiday itself but rather by one that does not speak for the whole) reprehensible are actually on the same side,” The post reads. “Please don’t allow trumps (sic) agenda and tactics to ‘divide and conquer’ separate us in our common goals of ‘Oneness’, although we have a long way to go, We have fought hard to get where we are and want to continue fighting Together for the rights of all people, in all respects.”

A follow-up post from the bar, posted around 2 p.m., reads: “Please rest assured that the Holiday Club and the majority of its ownership does not support the postings of Peter Malek. It was with great shock to us to learn and see this horrid opinion aired. We are working diligently to resolve the issue at hand and the resignation and separation of Peter Malek from Holiday Club is forthcoming.”

Update: Ton Up Club Chicago and 59 Club Chicago, both motorcycle clubs, issued a statement Tuesday that they will no longer be associated with the Holiday Club. The club’s events — Pints and Pistons, Bikes and Burlesque and the Chicago Distinguished Gentleman’s Ride — are looking for a new host partner that will “allow us to celebrate our positivity, closeness and the unbreakable connection that we all share to support one another,” and the location of an event schedule tomorrow night will be moved to Cobra Lounge.

“We are inclusive and we celebrate every single person’s creed, color, sexual and gender orientation. Not one person should ever be shamed for who they are,” according to the press release. “The Ton Up Club Chicago refuses to be associated with such racist, hateful and inappropriate imagery and language.”

Donate via Patreon to support me.
Thank You!