George Zimmerman allegedly threatened Beyoncé and Jay-Z over the Trayvon Martin docuseries produced by the rapper.

Jay-Z served as co-executive producer on Rest In Power: The Trayvon Martin Story, a six-part series looking at the life and death of the teenager who was shot and killed by Zimmerman in 2012.

According to text messages obtained by The Blast, Zimmerman sent text messages threatening the couple to Dennis Warren, a private investigator who was involved with the series. Warren said he had received hundreds of messages and voicemails from the 34-year-old man, who was acquitted of Martin’s murder.

The texts are reported to have said: “And I’m bringing hell with me. Oh, yea and tell Jay-Z he’s a bitch and his wife is a broke whore.

“If I see either of them in my life, they’ll find themselves inside a 13-foot gator.” 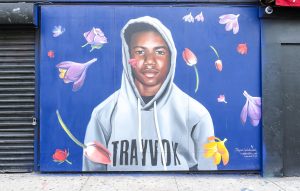 A mural of Travyon Martin in New York

Zimmerman is also said to have sent similar messages to Michael Gasparro, who co-executive produced Rest In Power. He reportedly sent Gasparro his own address and said members of the Genovese crime family were looking for him.

The 34-year-old was charged with stalking and harassing Warren in May. He has also previously threatened Jay-Z. After claiming in an interview with The Blast the rapper’s production team had “harassed” his family, he said: “I know how to handle people who fuck with me, I have since February 2012.”

Earlier this year, Jay-Z made a surprise appearance at a peace walk held in memory of Martin in Miami. Speaking at the sixth annual Peace Walk And Talk, he praised the teenager’s parents, Sybrina Fulton and Tracy Martin, saying: “We want to make sure that we stand and support and never forget that Trayvon serves as a beacon of light to the people out here. So you guys will never have to go through the pain and hurt that these guys went through.

“And his name will sit alongside the greats who lost their lives to push our culture forward — the Martin Luther Kings, the Gandhis. That’s the intention that we set, that his name serves as a beacon of light and hope to push us in a better direction, so thank you guys for your support. Thank you for being here