(CNN)Ethiopia has banned the adoption of Ethiopian children by foreign families, according to the country’s state-run News Agency ENA, citing concerns over abuse.

Ethiopian officials previously suspended adoptions back in November but allowed pending cases to continue through the process, according to the US Department of State.
Children adopted by foreign families in the past have been exposed to “various crimes and social crisis in the country they grew up in,” ENA said.
In 2013, a US couple was convicted in the death of their 13-year-old daughter, whom they adopted from Ethiopia. Hana Williams died in 2011 from “hypothermia brought on by malnutrition and being forced to remain outside on a cold rainy night,” according to court documents.
Hana’s mother was convicted of homicide by abuse in the first degree, while her father was convicted of manslaughter in the first degree. Both are currently serving prison time.
The state news agency said intercountry adoption made children “vulnerable to identify crisis, psychological problems, and violation of rights.” 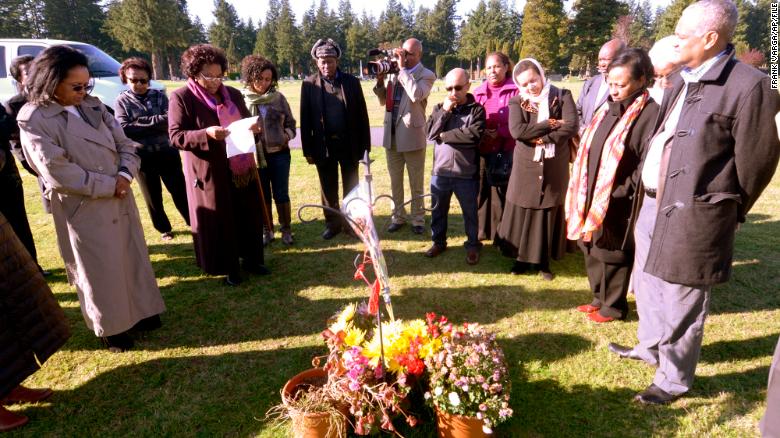 Members of Seattle’s Ethiopian community gather around the grave of Hana Williams on October 29, 2013, a few hours after the sentencing of Larry and Carri Williams.
The ban will “enable children to grow up in Ethiopian culture, custom, social values and practices of their birth place.”
The US Embassy in Addis Ababa said it is unsure how the decision will affect current pending adoption cases, but that it will continue to “engage with the Ethiopian government.”
Ethiopia was among the top 10 countries from which Americans adopted children in 2016, according to the US Department of State. Since 1999 more than 15,000 adoptions to the United States have been completed.

Actress Angelina Jolie famously adopted her daughter, Zahara Marley Jolie-Pitt, from Ethiopia in 2005 when the girl was six months old.

Mary-Louise Parker adopted her daughter, Caroline, in 2007 in Ethiopia.

As I Lay Dying frontman Tim Lambesis and his ex-wife, Meggan Murphy, adopted two daughters and a son from Ethiopia. In 2014, he pleaded guilty to charges that he tried to hire a hitman to murder Murphy.

In 2008, Brooke Smith and her husband, Steve Lubensky, adopted a baby girl named Lucy Dinknesh Lubensky from Ethiopia.
The African country has seen a steady decline in adoptions since 2010, according to statistics from the State Department. In 2016, Ethiopia experienced “changes in the government office that oversees the processing of adoptions,” the State Department says. These changes contributed to ongoing processing delays.
Ethiopia says the new proclamation “encourages local adoption, family reunification, and reintegration that will enable children to grow up in the midst of their fellow citizens.”